I just remembered that I meant to post these. Since I mostly do nature work, I rarely have photos taken of me "in action". Rarer still is when they are as cool as this one, taken by the multi-talented Chris VanAntwerpen, who was our host, guide, and provider of access for the day. 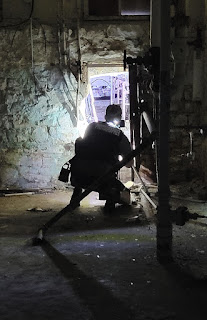 It is an interesting shot for me, as it is the very first time I was using the 9000 lumen LED light rig I had built specifically for shooting in the total darkness of the tunnels and basements under the old hospital facilities.  As you can see by Chris's shot, the powerful LEDs throw a very blue light which I have to correct on the computer later.  9000 lumens is a LOT of light, but the rig is made up of 3 independent units of 2000, 3000, and 4000 lumens so I don't have to use them all at once.  This narrow tunnel with all 9000 was horribly over-exposed, so I killed two of the units and lit it with just 3000 lumens...almost enough to illuminate the end of the tunnel, but not quite. That keeps a little bit of mystery in the shot. :)  So here it is, the shot I was making in the above photo: 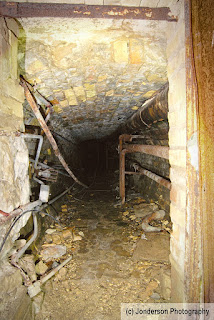 As you can see, it is still a little over exposed at the top and sides, where the powerful LEDs were closest, and the color correction still needs some fine-tuning, but as this is really just a "proof-of-concept" shot, I probably won't spend any more time on it. I was very pleased with how the light rig ended up working.
Posted by Jonderson at 12:22 PM