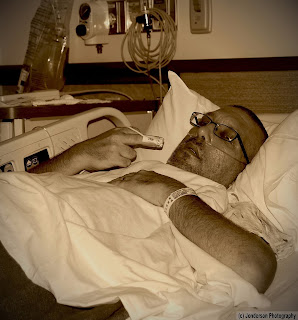 It hardly seems like it, but it was a year ago today that my friend Mike died.  I still think of him often, and find myself laughing at what I imagine he would say about things.

This photo is from the series I took of his short battle with esophageal cancer.  It is the last photo I ever took of him, and it may be my favorite.  Being too weak to talk never stopped him from being able to express his opinion, which should surprise no one who knew him.  He hated having his photo taken under the best of circumstances, and was feeling pretty ill when I showed up for my regular visit.  When I got ready, I asked him if he was feeling well enough for me to photograph him and this was his response.  I like it because it captures so much of what was going on.  His attitude towards cancer, his attitude towards having his photo taken, and his attitude at having a friend see him in this really dehumanizing and utterly helpless situation.  To see him that openly vulnerable, and to see that although his physicality was rapidly deteriorating his personality was every bit as it always had been, that cancer was not going to beat him on that front at least, really makes this a powerful and personally touching photograph for me.
Posted by Jonderson at 11:35 AM 1 comment: 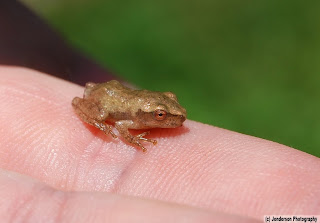 This little guy is only half an inch long.  Isn't he adorable?  :)

I am especially pleased with this shot, because I was able to remain so steady for it.  This was done with a non-VR macro lens, with me manually focusing by moving the hand with the frog on it closer and/or farther away from the camera, which itself was not on a tripod but simply held in my other hand.  Not bad for an old man, eh?
Posted by Jonderson at 12:09 PM 1 comment: