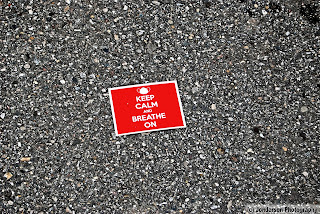 A divergence this month.

With skyrocketing COVID cases here in MI, the tendency toward worry and panic is going to be strong in the coming weeks. It is fitting then that I should spot this discarded piece of paper in a local parking lot. So rather than focusing on artistic merit, this month as an April Fool's fiat you get a legit high resolution (9 Mb) version of this photo, reminding you that no matter what life throws our way that humanity is one of the dominant species on the planet and that we will live through this. Not all of us, of course. And not as quickly as we would like, to be sure. But in the grand scheme of things, COVID is hardly even a blip on the radar as far as pandemics go. We have endured much, much worse! So the key to weathering this storm is maintaining a proper perspective....and exhibiting a great deal of prudence, which is something that our American society in particular is greatly lacking.

To that end, I have posted this photo very large, so that you have to scroll across the pavement, looking at all the individual little stones that make up the parking lot surface, before you find the card. Most browsers and photo programs/apps automatically resize photos to fit your screen, so you may have to change your settings to view it in the original size. Please do so. It gives you a better perspective and encourages you to think about it differently. Hopefully you get it. If not, email me or post a comment and I will be glad to explain it in greater depth. In the meantime, keep calm. And breathe on.

*Realized this morning (4/1) that I had uploaded the wrong version of this shot last night. Fixed it now. :)

Posted by Jonderson at 11:40 PM No comments: 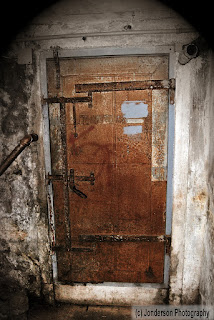 Sorry this is late, I forgot all about posting it! That is what happens when winter loosens its grip, I just get all distracted and am thinking about all the outdoor things I will be doing instead of paying attention to what I am supposed to be doing now.

This is another shot from the Asylum Series. This vault-like door is down in one of the steam tunnels. It is still quite functional, albeit rusty. Much like yours truly! :)

Something different for you this month, a look into the studio to see what I have been getting up to while social distancing. :P

Here are a few shots from a light study I have been doing. Not ordinary light though, no. This is a UV light study. Ultraviolet light is at the very bottom end of the visible light spectrum, and is the light-wave frequency range responsible for things like sunburn and faded photographs, among other things. For my study however, I am using not the whole range of UV light, but rather very specific frequencies. My control subject is a group of objects which I know to react interestingly to UV light. A porcelain skull bookend, an antique glass bottle, a turkey wishbone, a pink agate slice, vitamin E capsules, and a purple agate. The setup and camera settings are identical for each shot, the room is completely dark, with no ambient light whatsoever. The control shot here is lit only by a standard strobe flash. 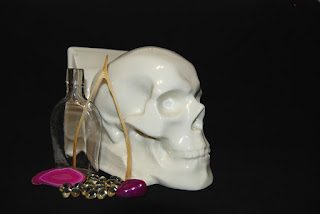 Pretty normal looking group of objects, with everything appearing as it does in "normal" light. Great! Let's have some fun with UV light! 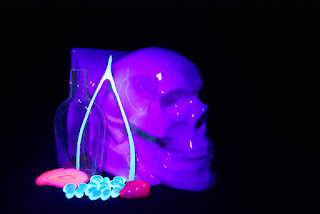 This shot is a four second exposure using a 395 nm UV light wavelength. This is roughly the frequency commonly known as "blacklight". The light itself is a pretty purple color. The abbreviation "nm" stands for nanometers, btw. A nanometer is one billionth of a meter. At this frequency, there is not much change in the agates, just a bit of a glow. The bottle seems entirely unaffected, and the skull seems only to reflect the color of the UV light itself. The wishbone and Vitamin E capsules however, have taken on a bright blue glow. It is a very 1970s disco look, don't you think? :)  OK, let's try something a little more dramatic, shall we? 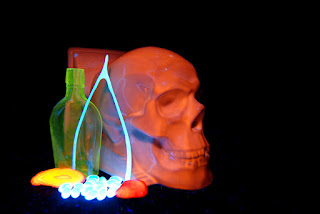 Oh yeah. Now we are cooking! Again, a four second exposure, but I dropped the frequency of the light wave in this shot down to 365nm and what a difference! The porcelain skull is glowing orange, as some unknown element in the porcelain material is reacting to the light at this frequency. The wishbone is still glowing its bright blue, as are the vitamin E capsules, although they are glowing significantly brighter. The agates are now also glowing yellow and orange quite intensely, again due to whatever unknown element in them responding to the UV light. Most interestingly, the glass bottle is now glowing bright green, which is also indicative of the presence of a UV reactive element, except in this case that element is known...it is uranium. Additionally, at this wavelength extraneous matter like lint and dust particles that were previously invisible on the black cloth are glowing purple.
One other interesting thing I noticed is that the shorter wavelength light produces much higher energy, and appears to be causing a weird blurring in some places. Could be visual distortion, could be that the sensor on the camera is freaking out at something it wasn't really made to handle. Hard to say, and I am not really worried about it at this point as this is just a light study. Anyway, fun stuff, hope you enjoyed this little peek into one of the things I do for fun. :)
Posted by Jonderson at 9:13 PM 3 comments: