August 2021: A Slight Change of Plans 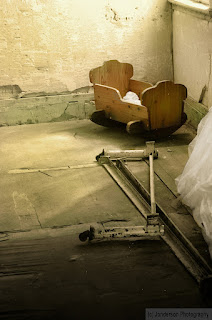 Things for the next month or two are going to have to be pulled from my stock, as I have broken my ankle and can not get out to make any new photographs. It is hard, especially on a nice day like today, but I do have to admit that I am getting to the point where I do often need encouragement to slow down and not do some of the things that I used to be able to do without even thinking about them first. Sitting with my feet up is not in my nature though, and this is incredibly frustrating. My father would have called this experience "building character", and encouraged me to not complain about it.

I am told I should be walking again in early September. So this month you will get yet another shot from my latest trip to the old asylum in Traverse City. Next month I will change it up for you and give you something extra special. ;)

This photo was taken in the children's ward of the asylum, which was also used as the TB ward. I have been told since I was there that there is a doll still in this cradle, but I didn't get any closer to it than this shot so I never saw it. It is hard to imagine the realities of an infant being in an asylum, but it does tend to make me grateful for what I have, and puts the struggles of our current reality into a much healthier perspective.

Posted by Jonderson at 3:17 PM