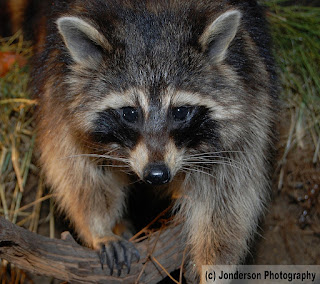 No, it isn't the Lone Ranger.
:)
It is the ubiquitous raccoon, or as my daughter calls it, a Trash Panda. An appropriate photo this spring as it seems that time is zipping on by faster than ever, and before you know it summer will be here once again.
In the meantime, spring is in the air here in the woods. It is still just a little too cold for the frogs to come out, although I did hear a couple of them last week. Lots of the birds are back now though, and it won't be long before the morels pop up. The turkey seem very scarce here this year though, which is a little worrisome. Perhaps it is the changing of the habitat, but it could also be a reflection of colder temperatures during winter or a rise in the coyote population. Either way, if there is one thing you can always count on in nature it is that things change.
Posted by Jonderson at 4:46 PM No comments: