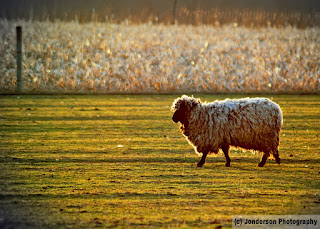 The subject this month is "challenges". Something that everyone can relate to these days. The key to overcoming challenges is flexibility. You have to be able to adapt. To change. Sometimes in ways that feel pretty major, and which take you out of your comfort zone and into places you have never been before. While that can be scary, it can also be thrilling and enjoyable. If you focus on those more enjoyable aspects and keep your eyes on the goal, odds are your challenge will be met successfully, even if it turns out less than optimally for you personally.

I pulled this photo out of the archives to use as an illustration. The light was very challenging. It was a very clear morning, the sun was setting directly in my face and back-lighting the sheep severely. In such low light, color can go all wonky. The challenge here was to preserve enough detail in the shadowed fur without washing out the detail in the corn and grass, while preventing the colors from washing out or sliding toward the blue end of things. As you can see, the end result was not 100% successful in any of those areas, BUT...I had a really good time using my knowledge and experience to meet such a challenging shot and addressing as much of each element as possible even though I knew ahead of time that such circumstances meant that it couldn't ever be a stellar photograph.  I was happy as heck to end up with it being as close to a usable shot as this!

The lesson is the same for us as we all spend the holiday season dealing with the necessary realities of a pandemic. The isolation, the uncertainty, and the accompanying challenges may seem very daunting and oppressive. But they, like all challenges, present the opportunity to extend yourself as well. To discover new ways of doing things which bring adventure and growth along with the challenge. And in the end, if you embrace these challenges and focus on making things as good as you possibly can within those limitations, you will look back on it and realize that you have accomplished something better than you thought possible, even if it isn't what you would consider to be ideal. 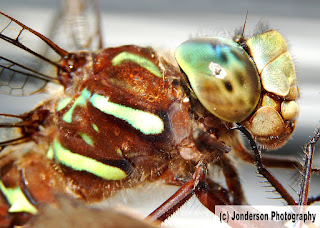 This is a type of dragonfly called a green-striped darner. One of the larger and most visually striking dragonflies in Michigan. It is interesting that I spent a good 20 minutes inching in slowly to get this shot without spooking it, but never noticed the tiny bit of what appears to be gravel half embedded in the creature's eye. It wasn't until I viewed the image on my PC that I noticed it. I imagine that such a thing is fairly common to the darners which live in close proximity to a dirt road, as this one does. Vehicles throw up all sorts of tiny stones such as this one as they drive, and the open areas of a dirt road provide good hunting spaces for the dragonflies. Inevitable that this should happen I would think, and probably much more common than I realize.

In the fall, these beauties reach the end of their life cycle, and their metabolism slows way down, making them approachable if you are patient. Otherwise they are constantly in motion and very intolerant of being approached, even very slowly.

Hope you are all staying healthy and happy, and are remaining focused on the things in life for which you are thankful rather than the things that you wish were different. That is one of the keys to happiness, I have found. That and having the right ethicist. ;)

So the question is being asked how one gets a macro like this, specifically how one gets this close to a dragonfly without it flying off.

Like every wildlife shot, if you want to get a good one you have to begin by knowing a lot about the specific animal you are trying to capture, including how it relates to its environment. In short, research.
Yes, you can luck into shots, but even reading a wikipedia page on an animal will give you an edge that will make the job easier and more productive. The more you know, the better off you will be. In some cases (not dragonflies, obviously) this research and knowledge can even keep you from being killed.

With dragonflies, and most other cold-blooded creatures, the colder it is the less active they are. So on a cold fall morning you will find most flying insects rather sedate and approachable. Too cold and they will no longer be alive, too warm and they will flee at your approach. So you have to time it right with the temperature, for a start. In the fall, many insects are near the end of their life as well, which will also make them easier to approach if they have not kicked off during the cold of the night.

Secondly, you have to approach very, very slowly. Insects process visual signals exponentially faster than humans, partly as a result of having compound eyes. So you really have to move incredibly slowly if you don't want to alert a bug. Painfully slowly, if like me you are arthritic. :)  It took me about 20 minutes to move the last 5 feet to get into position for this shot, and about half of that time was spent on the last foot or so.

For those of you who have expressed interest, this shot was done from a distance of about 4 inches, using a maxed 18-70mm zoom and a 2x macro. With the depth of field a scant 1.5mm, focusing was done by moving the camera itself rather than by using the focusing ring. (Auto-focus is right out on a shot like this, as the technology is simply not advanced enough...yet.) That enabled me to use both hands fully on the camera body to maintain maximum steadiness and stability. (Yes, this was a handheld shot. Not bad for an arthritic old man!) With such a shallow focal depth, this focusing method can be done simply by controlled breathing, which is necessary for stability with handheld macros shots anyway. At that point it becomes a matter of timing the shutter release to coincide with the point of exhalation where your desired focus is achieved.

Posted by Jonderson at 4:45 PM No comments: