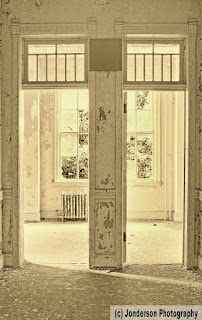 This is another photograph taken at the old Traverse City State Hospital. It is two identical doors leading into the same room. I have no idea why an architect would do this, but here it is.

For whatever reason, this particular view is one that I am drawn to every time I go through this building. Maybe it is the metaphors it presents which I am attracted to: two different options leading to the same conclusion, things which are not as alike or (as different) as they initially seem...or maybe it is just that the lighting is always really interesting here.

Posted by Jonderson at 11:10 AM No comments: 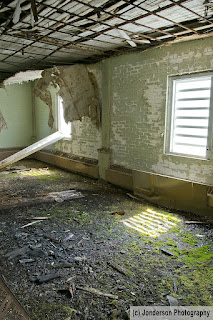 No, that is not the remnants of a green carpet. That is moss. That means that the wood floor is like a sponge. Step on it, and you would be three floors down before you even knew what happened.

Abandoned places are really fantastic for photographers. But they are inherently very dangerous. Having a guide, an official guide, is invaluable.

Christian VanAntwerpen has been my guide the last few times through the old Traverse City State Hospital, and I just can't say enough good things about him. Professional, accommodating, knowledgeable, and friendly. Abandoned buildings are rife with hazards, and they are constantly changing. Chris knows the issues each building presents at any given time, and makes sure that everyone remains safe while also making sure we get the shots we want.

I have been doing photography for 40 years, and Chris is one of the best guides I have ever met.

Addenda, 9/26/22:
I have been asked to provide more information on the location of this photo.
This is what was termed a "sun room", though the windows don't exactly lend themselves to the description. It was realistically what we would call a "social gathering area" for the patients on the 3rd floor of this building. It would have had chairs and perhaps a couple sofas, and small tables. The place I was standing in when I took this shot was a doorway of what was a nurses station overlooking the sunroom. Originally this was a tuberculosis ward, but eventually it evolved into the children's ward. In either case, this room is as close to "outside" most of the people who lived here ever got.

There are a lot of things that you have to pay attention to when you are going through these buildings, as this floor illustrates. If you put your foot in the wrong place, you could die. You want to get the good shots, and you are paying attention to all of the elements which go into that, but you also have to pay attention to your surroundings. That is one of the reasons for my glowing praise for Chris as a guide. He understands the complexities of these structures as they are used by photographers, and he is very careful to make sure that we remember to pay attention to safety first, and aesthetics second. At the same time though, the whole reason that this is such a poignant photographic subject in the first place is because of its history, and because of the very real people who lived...and died...in these rooms. You never want to lose sight of that either, because even though people have not lived here in almost half a century, those people are still ultimately the subject of every last one of the photographs taken here, by me or anyone else. I consider them to be portraits in that sense, even though they do not visually have anyone as a visible subject. The subject is always (for me at least) the people who lived here. The people, in this case, who sat in this now dangerously decayed gathering area enjoying each other's company and the scant but precious sunlight for a few hours before having to go back to the isolation and darkness of their rooms.

Posted by Jonderson at 12:10 AM No comments: 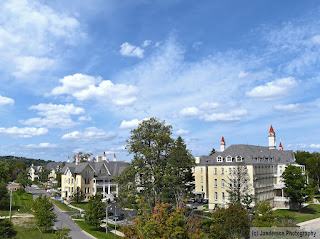 This is the renovated section of the campus of Michigan's Traverse City State Hospital (aka Asylum).
It was such a beautiful day, and they have done such a fantastic job of transforming the old hospital buildings into what is now a true miniature village, that I could not help but post this shot. It is truly beautiful.
Meanwhile, in the unrestored section.... 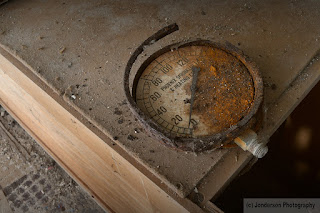 The contrast between the two images is impossible to ignore, more so than the connection between the two. But the connection is there nonetheless, as those beautifully restored buildings above used to be in a similar condition as the ones in which this sprinkler gauge now lies. And of course there is the deeper connection of purpose. The entire complex, right down to the gauge, was designed and built for the betterment of the human beings who are within its scope of influence. And so it continues today, both in the renovated sections and the unrestored sections, which provide not only a tangible connection to the past and the people who resided within those walls, but does so with an aesthetic beauty that I never grow tired of capturing.
Stay tuned for more photos from this site in the future.
Posted by Jonderson at 8:25 PM No comments: 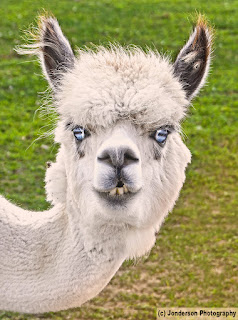 Alpacas are members of the Camel family, and are native to South America.  They are essentially small llamas, which have been domesticated for their wool. They come in all sorts of colors, but this particular genetic configuration is known as "blue eyed white".  The wool is all white, and the eyes are a striking blue.  Unfortunately, this particular genetic configuration also comes with drawbacks. These particularly striking alpacas are usually (though not always) deaf, and they frequently have complicated reproductive limitations.

The Llama branch of the Camel family (llamas, alpacas, vicunas, and guanacos) is interesting visually. The cute-grotesque ratio is nearly 1:1, with each individual usually varying only slightly on one side of the line or the other. For us humans, it is a lesson in taking the bad with the good. An especially important lesson for photographers. :)

Posted by Jonderson at 2:16 PM No comments: 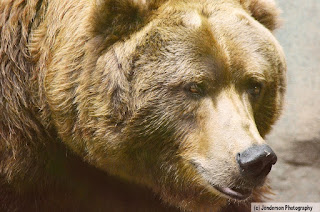 Rather than me writing this month, I thought I would just share what I think is the most haunting grizzly bear story ever told.

In 1980, Tag and John Rittel were hunting in the Montana wilderness. They happened upon a battered old rifle, and nearby was a large rock onto which a horrific story was carved. The story was dated 1881, and was apparently carved over a period of days by a Mountain Man named Joe Baker. In those days Mountain Men in particular were not typically very literate, so much of it was phonetically spelled. I am going to correct that here to make it easier to read. The rock, in part, read as follows:

"Joe Baker - Grizz killed me God help - I hurt bad - leg chewed and is rotting - bear may come back - my rifle is broke in two - my ribs are broken - oh holy God let me die."
The very last line of the rock reads: "I hear the damn grizz - she came back".

Today the rock is displayed at the Rittel family's Blacktail Ranch, near Wolf Creek, Montana.

Posted by Jonderson at 2:20 PM No comments: 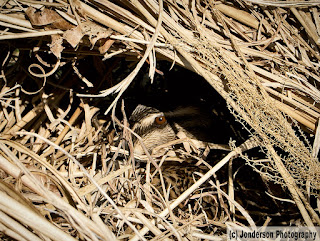 Natural camouflage is incredible. This duck hen has chosen an ideal spot to nest. Even though I was pretty sure it was there, I was within several inches of it multiple times over the course of a week or so without ever seeing it.  It wasn't until I quite by chance happened to see her leave it to get water that I pinpointed its location. Now I am looking forward to seeing her ducklings in a few weeks, but in the meantime, she is as well protected as she could possibly be.

Posted by Jonderson at 4:55 PM No comments: 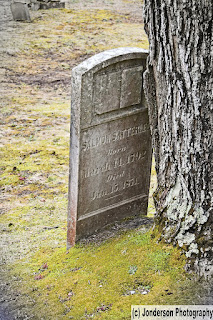 It is a rare thing in this area to have such an old gravestone be so unweathered and clear, especially in a cemetery right off Lake Michigan where the windblown sand tends to wear away stone fairly quickly. But at some point in the last 150 years or so a tree sprouted and grew right on top of this grave, serving as a shield from the elements and protecting the inscription from erosion.  Nothing is permanent of course, and in time the tree will fall and the stone will erode away to its component minerals.  For now however, the memorial of Salmon Satterlee, born 1792, remains virtually as strong as the day it was put up in 1871.

Posted by Jonderson at 1:40 PM No comments: