Early in 2015 I was approached and asked to photograph the St. Stephen's High School building, in Saginaw.  I call it that, even though there hasn't been a high school there in years, simply because that is what it was called when I was a student there.  Even then it housed more than the high school though, it was used for grades 5-12 then.  In recent years, the building was used as an elementary school.  That too has closed, and for the last year it has been used primarily for religious ed classes.  The gym and sports field have been rented out quite steadily, but the classroom part of the building itself is not really used a whole lot anymore.

To complicate matters further, the parish itself has undergone a merger this summer and is no longer even called St. Stephen's, but is now named St. Dominic's.  I mention all of this because it is an odd enough thing to return to a place of your youth after being away from it for so many decades.  It is odder still to be documenting its waning and uncertain future.  Perhaps it is the obvious parallel between our own mortality and the finite nature of all things, but as I took these photos I was very conscious of the one constant theme which over-arched the whole day:  Change.

For the former students and faculty, for the members of the parish, the diocese, and even for the city of Saginaw itself, these photographs serve as a documentation of change.  For many, change is something which is sad.  And it can be that.  It can also be very difficult and painful.  Yet without change, growth can not take place.  And without constant growth, one is not truly alive.  No flower ever bloomed without first breaking out of a seed hull, pushing away topsoil, and getting blown by the wind.

I do not know what is to become of this building.  The parish itself does not know.  It seems in exceptionally good shape for its age, it is well-maintained, and with the exception of a few trouble spots it seems like it would be easy enough to continue serving the community in some fashion.  But the reality is that unused buildings this size are nearly impossible to maintain over time in a financially viable manner.  I am glad I had the opportunity to take these photographs now, while the uncertainty of the future which is reflected in them is still tempered by a measure of vibrance and vitality.

The following photos (in alphabetical order according to file name) are a small selection taken from the full documentation of the building and grounds.  For those interested, there is a CD available containing the full set (approx. 100 photos).  Email "admin[AT]jonderson[DOT]com" for details/to order.

This is what used to be the band room.  (Note the acoustically angled ceiling.)  Like many of the classrooms are currently, this one is carpeted and shows signs of recent use.  There were certainly no carpeted floors when I was a student here! :)  This is one of the few rooms in the building that I never got in trouble in. 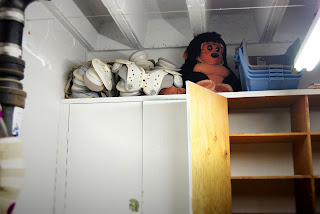 An equipment closet in the boy's locker room.  Empty shelves, shoulder pads...and a stuffed gorilla.  This was the shot I adapted for the earlier blog post. 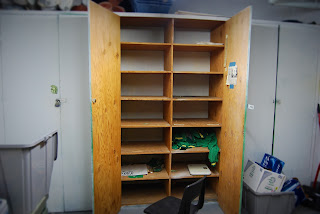 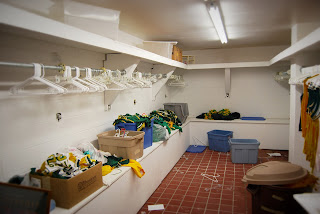 What used to be the old shower area, converted into general storage for both athletic and cheerleader uniforms. 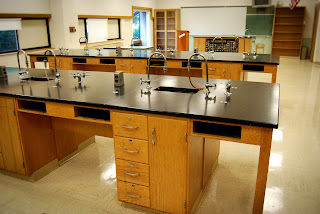 The chemistry classroom, looking nearly identical to the way it looked 40 years ago.  A whiteboard instead of chalk, but the same lab tables and gorgeous wood cabinetry.  Like all of the classrooms, even the ones that have not been used, it has been very well cared for. 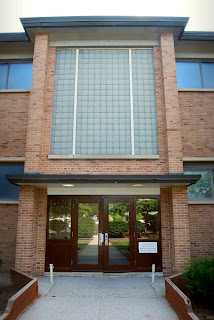 The "middle doors", as we called them, seen from the parking lot. 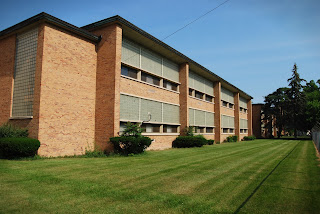 The classrooms as seen from the SE, near the corner of Sutton and Sycamore streets. 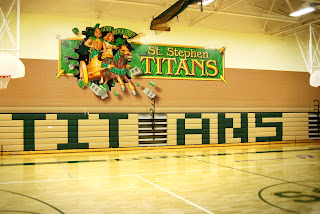 The West wall of the gym.  The gym is in spectacular shape, the floor is simply beautiful!  They have really taken great care of it.  The massive old wooden bleachers that many of you remember are gone, replaced with these more modestly sized metal ones. 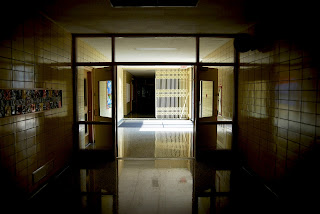 Looking north into the classroom section of the building from the corner by the office.  I was surprised to see the security gate still there, it seems very much out of place in a 21st century school building.  To be honest, it always seemed out of place to me, even as a teenager. 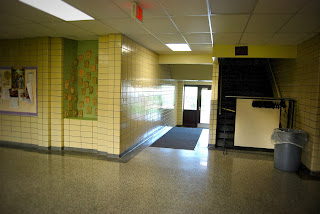 Looking toward the "middle doors" from the hallway.  Who remembers what statue used to be in the wall there? 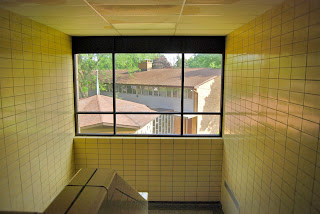 Looking out the second floor north end windows at what used to be the convent.  Currently that building houses the parish offices. 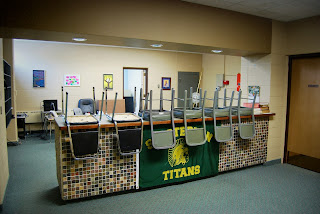 The school office service counter.  I can still picture Mrs. Hoffman sitting back there, disappointed to see me again. :) 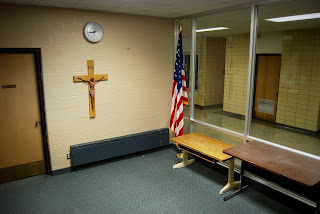 The office "waiting area".  There used to be chairs where those tables are, for students like myself who were waiting their turn to discuss the finer points of education with the principal.  If I remember correctly, one of those chairs was engraved with the name "Walt" for some reason. 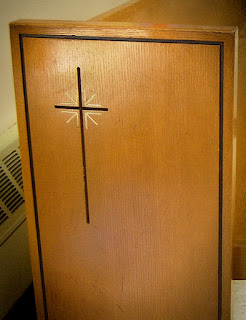 Several years ago, the parish built a new church on the property.  The old church, which was located in the building next to the gym, has been turned into the parish hall.  However, a few of the old pews from the old church are placed throughout the building.  They are distinctive, and evoked many memories. 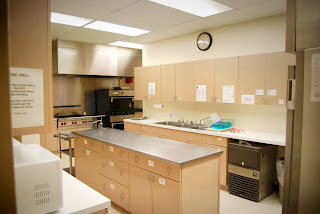 This is the parish hall kitchen, located along the back wall of what used to be the church about where the cry room and confessionals were. 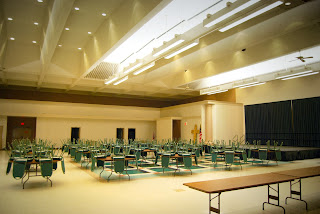 This was perhaps the most disorienting part of the day for me.  When I was here last, this was the church sanctuary.  Now it is the parish hall.  The ceiling is the same as it was, but everything else is different.  The altar used to be where the doorways are at the far end.  Those are now classrooms.  Behind the stage on the right side were stained glass slit windows.  They are still there, but have been drywalled over.  It was a very surreal moment for me. 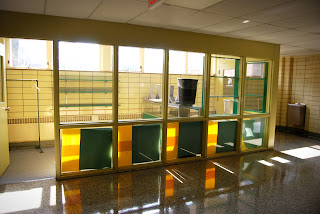 This area is on the second floor, at the top of the middle staircase.  There was originally an island of lockers here, which were removed to put a vice-principal's office in.  Most recently the room was used as a school store.

I would like to take the time to once again thank the staff of St. Stephen's, now St. Dominic's, for allowing me unfettered access to the building and grounds to take these photos.  While primarily for documentary and artistic purposes, I am sure that for some people they will be more than that.  It is my hope that at least for some of them these photos may make the changes which the parish is undergoing a little more bearable, and provide a context underwhich they can more confidently continue to grow.
Posted by Jonderson at 11:10 AM

Your photographs and commentary were a joy to view. It is a striking documentation of this building along with your memories! Thank you for taking the time to share these images of this beautiful building.

It's been 46 years! Wow, what a trip. Thanks for posting!

This is sad. Mr Thelens room hasn't changed a bit. The pads in the locker room were the saddest photo. Lots of memories there.

Sorry for the delay in getting your comments approved and posted, and thank you for providing them!