August 2019: The House Where Nobody Lives 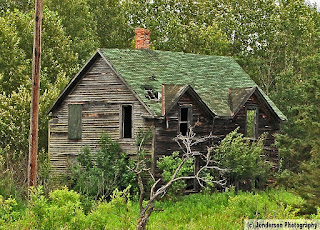 I was driving through Michigan's Upper Peninsula the other day and saw this old house. There are numerous such structures in the U.P., not all of them unoccupied. This one in particular reminded me of a Tom Waits song so much that I had to turn around and go back to capture it.

The song is called "House Where Nobody Lives", and the end of it reads as follows:

"What makes a house grand ain't the roof or the doors.
If there's love in a house it's a palace for sure.
Without love, it ain't nothing but a house...a house where nobody lives."

Having just finished spending four days in a one-room rustic cabin full of some amazing and abundant love, it was pretty powerful. So although not technically a very good photo, it may end up being my favorite shot of the summer.
Posted by Jonderson at 7:22 PM