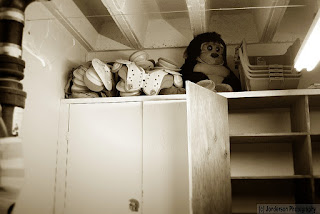 Last month I was granted an interesting opportunity...to photograph the school I attended from 2nd through 10th grade.  Specifically, the building which housed the 5th-12th grade classrooms, gym, and sanctuary. The high school was merged out in the 1980's, and the building then was used for K-8 education. That program is now also closed, but the Catholic parish which owns it has still been using the building for some religious eduation programs.  The gym and athletic fields also still get rented out, and what was the sanctuary when I went there was converted into a reception hall when the new church was built.  That said, the majority of the building is now going largely unused.  A shame, as for its age it is in amazingly good shape.  The quality of the original construction, as well as the level of care it has been given over the years, is quite apparent.

In the next week or so I will be uploading 15-20 selected photos from this series here on the blog, along with commentaries, and will make a disk of the full series available for those interested in seeing the whole thing.  The above "sneak peak" image is an adaptation of one of those photos, which was taken in the men's locker room storage area.

I would like to take the opportunity to thank the staff of St. Dominic's Parish (formerly St. Stephen's) in Saginaw, particularly Fr. Steve Gavit and Business Director Mary Vogelpohl, for their graciousness in allowing the shoot and providing me with such open access to the facility.