Yes, you get two photos this month.  Aren't you lucky??  :)  Actually  you are, as I have been very busy this month and was worried that I would be late with updating again.

The first is the photo which I had planned for this month, a non-typical view of DaVinci's famous horse sculpture. 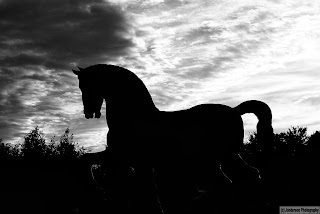 The second was taken as part of a shoot I did for Michael Gard, a San Francisco artist who was in town for ArtPrize.  He created this 13-foot wire sculpture, lit by over 1000 LEDs, and suspended it from a 10-foot helium balloon.  (It made the top 10, btw!)  As he flew it around downtown we happened upon a couple who had just been married.  They were enamoured with the spectacle, and Michael offered to let them "hold the reins" and pose for me. 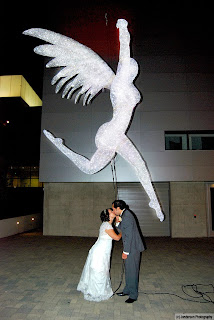 Happy October everyone!
Posted by Jonderson at 8:02 PM